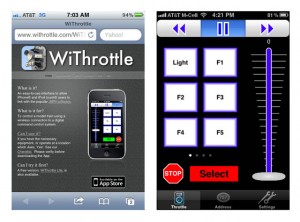 I saw some information on a throttle called a WI Throttle and since you never have to many throttles. I thought this would be a good thing. It is a good thing… this is cool.

-First I needed a way for my computer to talk to the Digitrax booster, this required a adaptor. It can be the Digitrax one (PR3) or LocoBuffer-USB from RR-CirKits. I chose the latter. It was $10 cheaper..the PR1 was able to program sound decoders (a feature I don’t need).

-Next you need to install the drivers, this took some doing as I have an older computer yet it has Windows 7 installed. After 4 tries and then a computer restart, I had the drivers installed.

-Next I started up JMRI Panel Pro and it went straight to the set-up screen. I input the System Manufacturer (Digitrax), then my adaptor (LocoBuffer). JMRI recognised the port and that I had a DCS100 (pretty cool). I hit save, did a JMRI restart and everything was good. 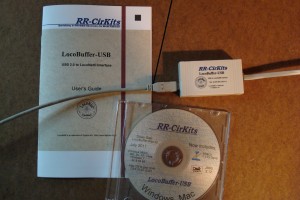 -Now I opened the WiThrottle tab in JMRI, the WiFi connected with the server and I was off.

-On the phone the app asked to connected to the serve and it did. I went to the address screen, input an address (03), hit set…and … I was controlling a train with my phone.